It’s Friday! And that can only mean one thing…

It’s #FridayBookShare time! This is a tag created by Shelley Wilson which helps us recommend books to our friends

Do you want to join in? That’s easy! Just complete the following for a book of your choosing:

First line of the book.

Delightful design (add the cover image of the book).

Audience appeal (who would enjoy reading this book?)

So what book do I have in store today? It’s none other than The Colour of Magic, in the wonderful Discworld series! 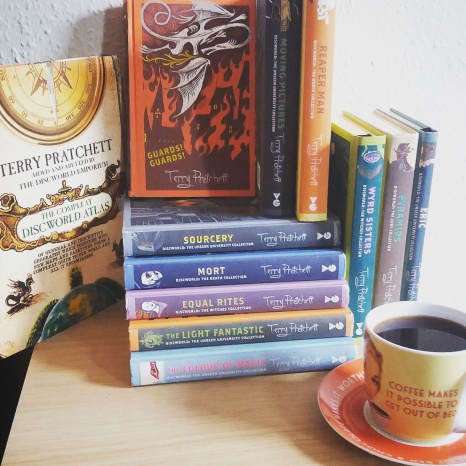 First line of the book

In a distant and second-hand set of dimensions, in an astral plane that was never meant to fly, the curling star-mists waver and part…

On a world supported on the back of a giant turtle (sex unknown), a gleeful, explosive, wickedly eccentric expedition sets out. There’s an avaricious but inept wizard, a naive tourist whose luggage moves on hundreds of dear little legs, dragons who only exist if you believe in them, and of course THE EDGE of the planet…

Fantasy fans with a sense of humour. The whole of the novel—of the Discworld saga, in fact—is written in a comedic style that will make you giggle often, if not laugh out loud. Despite how jokey everything is, the plot itself is pretty serious, and the world is very compelling. I would recommend it to anyone, since I’ve been known people who don’t fancy fantasy getting into the series—and enjoying the ride.

“It was all very well going on about pure logic and how the universe was ruled by logic and the harmony of numbers, but the plain fact of the matter was that the Disc was manifestly traversing space on the back of a giant turtle and the gods had a habit of going round to atheists’ houses and smashing their windows.”

Let me know what you think! Cancel reply